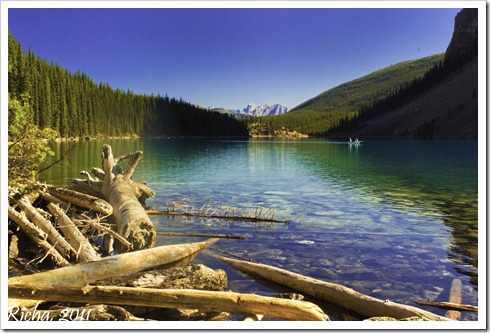 Okay I have a big time problem with this ad: 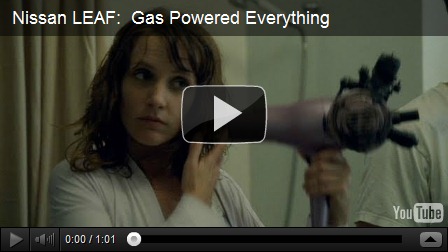 Why you ask? I am so glad you did. This advertisement implies that electricity is a “pure” source of energy because you see it comes form an electric outlet. But do they show how electricity is actually generated? Because news flash, electricty is not produced in their wall and supplied to the wall socket. Let’s see how the world energy is produced.

Well what do you know, 87% of world energy comes from, wait for it, fossil fuels (coal + oil + gas). Actually about 30% of it comes from coal which actually produces worse green house gases than the petrol you use for your car. And let me not get started with the environmental impact of nuclear energy and for that matter, even hydro-power.

The best solution, you ask? Well lets all stop using electricity or any kind of technology. Let’s go back to the caves. What, can’t do that? Then stop screaming environmental impacts and how much you love this planet.

Like it or not, the Earth is currently over populated by human species. That is enough to destroy the natural balance of this planet. And then we have our luxuries and comforts that we can’t survive without anymore, which makes a bad situation worse. So unless you can give all those luxuries up and are ready to live in a cave without electricity, technology or even so called basic necessities, there is no point saying that you love this planet and care about the “environmental impacts”, the “environmental foot-prints” etc. Those are just fancy words.It can make you feel good but they don't mean much. So stop using them. If you do want to do something then save electricity, lower the heating system a bit (if possible don't use it at all) and for God’s sake, stop reproducing like, well humans. (Can’t think of any other species in the animal kingdom that grow faster than them humans. They surpassed the bunnies long along..). Its not much and it will definitely not save the planet. It will just slow down its demise..


PS: I realize the chart above is for world energy and not electricity per se. Well the electricity  statistics is a bit expensive for me at the moment (they are asking me to pay! The nerve on them..). However, the past data suggest that the statistics for the electricity generation is slightly better but still about 67-70% of world electricity is produced by fossil fuels and about 15% from Nuclear. Again not very environment friendly, is it?
Posted by Richa 1 comment:

Weekends Fun: The moon, the sun and everything else

Well I have missed posting these for past few weekends. So what have I been doing over the weekends? Taking pictures, of course. However, I have been experimenting a bit these days. Something that you tend to do when you are all by yourself without any friends or foe in a strange city. So here are some of the results:

The first picture is a combo of two my experiments: night photography and panoramic pictures. This is the Calgary skyline in the night time:

The night I took the above picture was the night of full moon (the night of Rakshabandhan). As I crossed the Bow river to return back to my place, I saw this amazing scene. Obviously I had to take the picture. The river looked simply breathtaking! 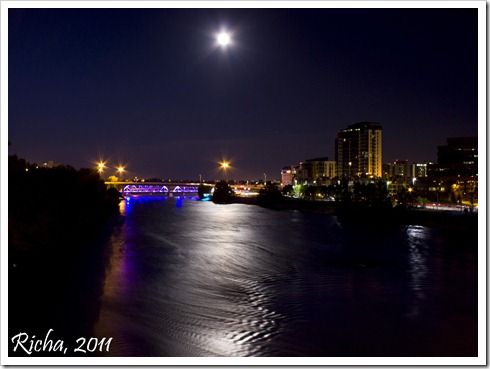 Two weeks later, it was time for the new moon night. So I took this picture this Friday (well nearly new moon night, I am not sure I can take picture of a new moon). 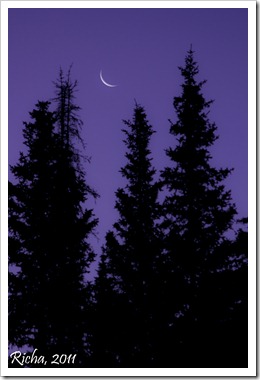 Next picture is of the sun rise. I woke up at 3:30 AM on a weekend, drove 2.5 hours, stood in freezing cold to take this picture. It’s the shot taken at the moment the first ray of sun hit the top of the mountain. Trust me that moment was worth all the effort. 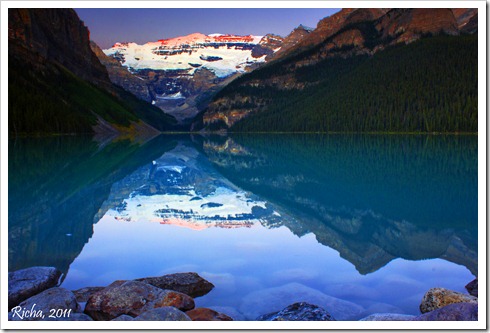 The next is picture from few moments later. (Blogger is messing with my colors for some reason. It was beautiful. You have to take my word for it.) 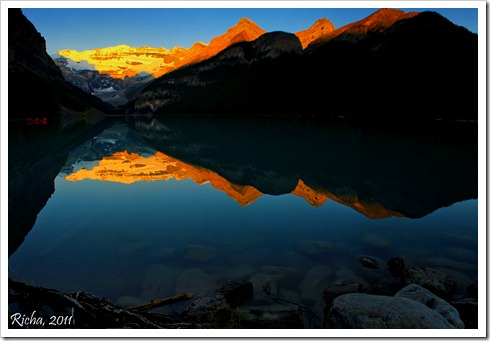 One more panorama before I leave. This one is taken on the road in Banff National Park..

That’s all for today folks! Catch you later…
Posted by Richa 8 comments:

- Is there something called photography block? I have been taking pictures but somehow they never come out the way I want them to be. I see them, delete them and go back again to take some more pictures.

- Why do almost all the comedies in US revolve around a male lead actor who is a douche bag, who, miraculously, is married to a beautiful woman who for some unknown reason tolerates him? Where is the comedy in seeing the douchebags messing up things and then boasting about it?

- How can anyone ever justify the looting hooligans of London? Why is media even trying to justify them? How do so called deprived youth be satisfied by stealing HD TVs and designer clothes? Is that what they are deprived of? They should all be sent to Somalia and they would know what deprivation really mean.

- Speaking of Somalia, what is with Indians and charity? Why don’t they ever donate? Seriously, few bucks out of your pocket won’t make a difference to you but it can make huge impact in someone else’s life. Please donate.

Oh well, I have been meaning to write all these as posts for past two weeks but carpal tunnel syndrome is raising its ugly head again. So I thought of simply posting these thoughts.